Over the next 10 years, one million jobs will be open in British Columbia. Eighty percent of those jobs will require post-secondary education and skills training.

These two forecasts contained in BC’s latest Labour Market Outlook tell us a great deal about where BC’s economy is headed and what we can do to prepare.

They also reinforce what I hear from leaders across our economy: developing and attracting talent is an urgent priority for the province.

Fortunately, British Columbia is well-positioned to meet this challenge.

BC is home to excellent public post-secondary institutions. New and traditional industries across the economy are investing in people and skills to improve competitiveness and productivity. And BC’s research community is attracting billions of dollars and generating new ideas and technologies.

The BC government is also stepping up to the plate. As part of the largest expansion of post-secondary education in generations, we’ve created thousands of new university and college spaces, reduced barriers to education, expanded grants, built new student housing and restored apprenticeships and trades.

But more still needs to be done. And it is.

Earlier this week, I released the StrongerBC Economic Plan, a whole-of-government long-term economic strategy. Preparing British Columbians for the jobs of tomorrow is one its key pillars. 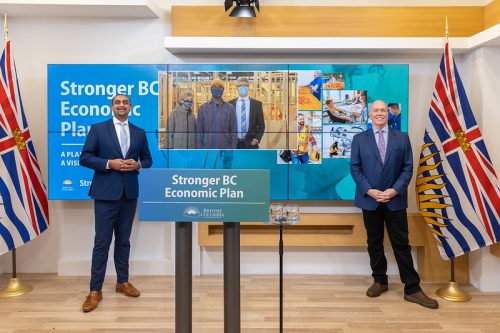 Over the coming weeks and months, these steps will be complemented by additional action to expand opportunity and access across the post-secondary sector as part of the integrated implementation of the StrongerBC Economic Plan across government.

Following months of consultation and listening to British Columbians from all walks of life, the plan we’ve developed puts forward two key goals — inclusive and clean growth — and six core missions to guide our government’s work. It’s built on the principle that by tackling big challenges like climate change and inequality, we can grow an economy that is more competitive, productive and resilient.

So, for example, in addition to closing the skills gap, the StrongerBC Economic Plan emphasizes investments in child care as a means to reduce barriers to workforce participation. It adds value and jobs in our natural resource sector by leveraging low-carbon technologies such as mass timber. It improves competitiveness by closing the digital divide. It opens up new markets by leveraging BC’s low-carbon advantage and reputation for environmental and social responsibility. And it advances lasting and meaningful reconciliation with First Nations and Indigenous Peoples.

These priorities build on the approach our government has taken since the start. Following years of underinvestment in our province, we put people back at the center of decision-making. And through the pandemic, floods and fires that followed, we marshalled resources to help us pull through. Today, BC leads Canada’s recovery with more jobs than before the pandemic, rising wages and more people moving to the province.

As Minister of Jobs, Economic Recovery and Innovation, I am pleased, but not at all surprised, by the positive reaction the plan has received from business, labour, First Nations and community leaders across the province. As tough as the pandemic has been, it’s clear to me that British Columbians are eager to work together on our shared priorities for our province’s future.

Because now is our moment to build off this strong recovery and to give our next generation the opportunities to succeed in the jobs of the future.  It is our moment to show the world that you can grow an economy – while tackling climate change. And it’s our moment to create a province that works for everyone.

With the StrongerBC Economic Plan, we have a clear path forward.