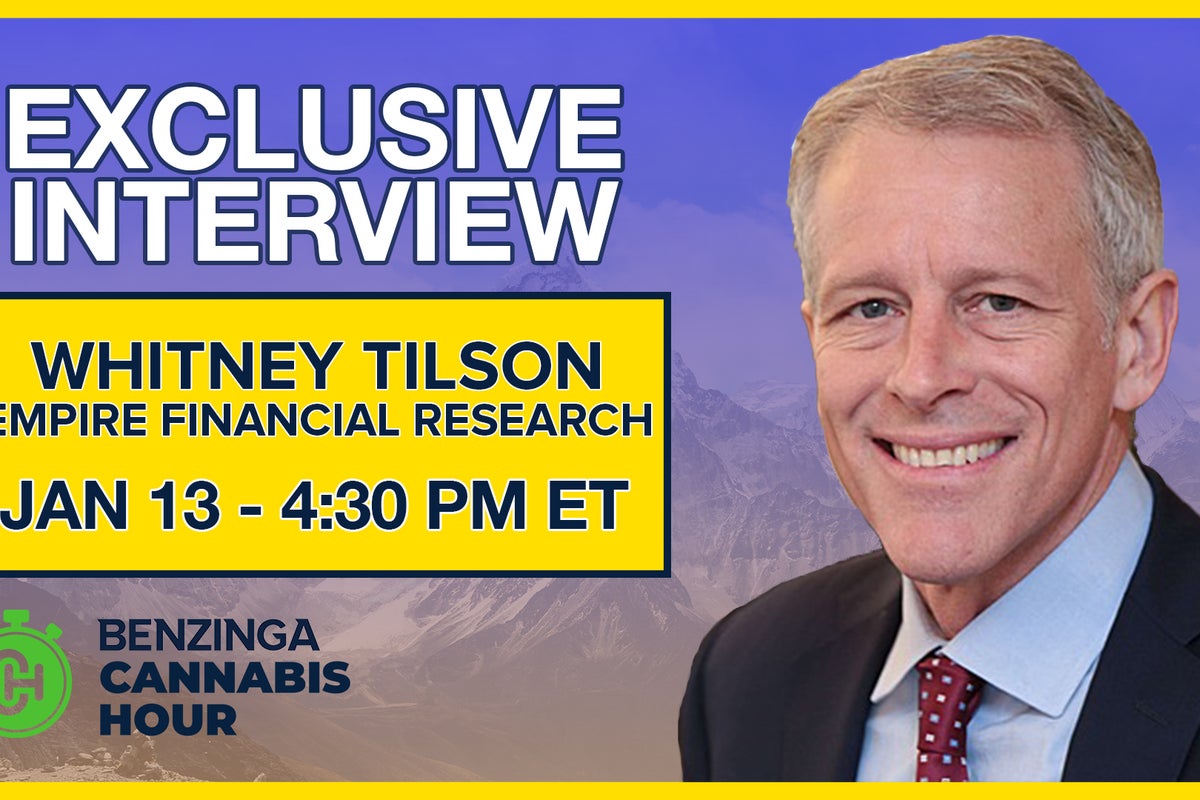 Investment expert and former hedge fund manager Whitney Tilson, current president and CEO of Empire Financial Research, recently stopped by Benzinga Cannabis Hour to discuss his investment thesis including his 2022 outlook as it pertains to the booming cannabis industry.

The Value Of Value Investing

Tilson described himself as an “old school value investor,” who “learned investing at the feet of the masters, like Buffet and Munger,” adding that he is always trying to expand his mind and remain open to new investment opportunities.

“I just listed my number one stock pick for my newsletter business for this year…and it’s AdvisorShares Pure US Cannabis ETF MSOS –  basically the U.S. cannabis index,” Tilson said.

He added that he remains bullish on the cannabis industry because “the sentiment is changing” along with cannabis legislation.

Tilson qualified the advance of legalization in states as irreversible. “Just look at the surveys of Americans who favor legalizing cannabis. It’s gone up dramatically, and politicians will follow the voters, eventually, for sure, and the regulators will follow the politicians, and the institutional investors will come along as well.”

“I like identifying trends early. As an investor, the single best thing you can do is find an enormous trend and get in early, before all the institutional money comes in,” Tilson told Cannabis Hour hosts Javier Hasse and Elliot Lane.

“In particular if you can get in when the sentiment is crappy and the valuations are low!” Tilson added.

In addition, he shared the story of how he got “ahead of an enormous trend” and called the top at Tilray TLRY.

“My history in this sector is fairly limited, but [the trend] it first came to my attention in the enormous bubble that had to blow of top in September 2018, when famously Tilray hit $300 a share, intraday, and at that time, you know…Tilray was trading ‘north’ of 1000x revenue and had a 30-plus billion market cap, it was absurd, and I went on national television on Yahoo Finance, literally, the hour Tilray peaked at $300 a share. I said ‘this is one of the most extreme bubbles I have ever seen in my investing career’, this stock could be down 50 percent in a matter of weeks, would be down 90 percent, turns out I was too conservative, it went down from $300 to $3, under $3, went down by more than 99%.”

Tilson explained that after calling the top at Tilray’s bubble he stopped paying attention to the sector, until last year. His team built a “blue-wave basket” of cannabis stocks they perceived could benefit from the triumph of Democrat candidate, Joe Biden, in the last presidential elections. “Of a ten-stock portfolio we put together for our subscribers, one of them was Green Thumb Industries GTII (OTC: GTBIF), at $13. It went to almost $40 within about six months, and we got our subscribers out at $29, made 112% for our subscribers in about nine months.”

Responding to a question from Cannabis Hour’s audience, “Isn’t it funny how the ‘older’ guys have a longer time horizon than ‘younger’ investors? YEARS, not days,” Tilson noted that indeed, he was “not retiring ever” and advised younger investors that they “should have a long-term horizon.”

Tilson pointed out that younger investors have grown up in the longest bull market in history. “You have been conditioned to buy every dip and that is not the way the stock market works. The meme stocks for example. Just because something goes from 10x revenues to 20x and then trades back to 10x revenue does not mean that stock is cheap!”

Tilson advised that investors should look at the trends as well as EBITDA and the fundamentals of cannabis companies before investing. He described EBITDA as representing “real cash flow…real revenue” that can become a “real catalyst” for investments.

Tilson explained how he learned about the two best ways to make money throughout his career and shared his thoughts on what he considers to be the best MSOs. He advised young investors to control their expenses, taking advantage of their retirement plans at work (which could be “the ultimate investment of all times”) and investing in index funds such as S&P 500. “I happen to tell my daughters ‘look, just buy the S&P 500 index fund SPY‘; and for most people, ‘just buy an index fund.’  Now, if you want to try to be a little clever and buy a couple of sector funds like MSOS or XBI, for cannabis or biotech, great.”