Following Warren Buffett’s investment advice has been a very profitable strategy for many years now, and especially in a down market, investors want to know where the Oracle of Omaha is putting his cash. One of the great perks of Buffett’s investment strategy is that he doesn’t try to overcomplicate the process. If a company has a wide economic moat, generates a lot of cash, and operates an easy-to-understand, high-quality business, there’s a good chance Buffett will like the stock.

And given that the S&P 500 and Nasdaq Composite have dropped 13% and 19% year to date, respectively, now is an optimal time to buy shares of first-class businesses. In the words of Buffett, investors should be “fearful when others are greedy, and greedy when others are fearful.” Let’s have a look at two Warren Buffett stocks that investors can turn to amid the latest market correction. 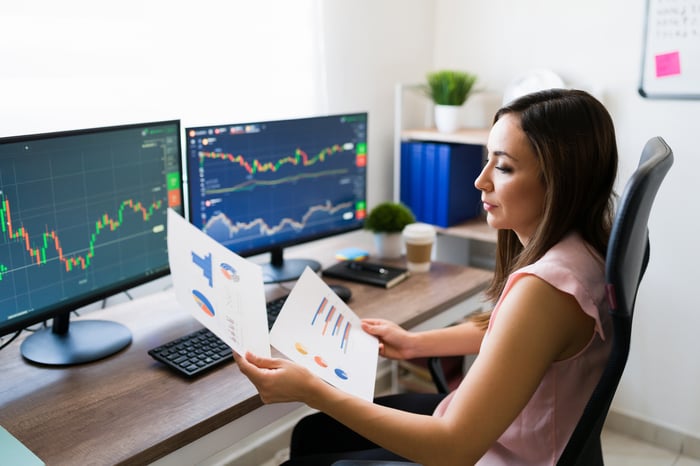 Apple (AAPL -0.29%), one of the most prominent technology companies of our time, has shed 7% of its value since the start of the year. Talk about a wide economic moat — the Tim Cook-led enterprise commands 50% of the U.S. smartphone market and 16% of the industry globally, second only to Samsung. In its fiscal third quarter of 2022, the company’s total sales grew a modest 1.9% year over year to $83 billion and its diluted earnings per share declined 7.7% to $1.20. Its products segment, which fell 0.9%, was carried by strong iPhone sales, which increased 2.8% to $40.7 billion. Meanwhile, the Mac, iPad, and wearables, home, and accessories segments posted negative growth year over year.

Its services category — which includes Apple Music, Apple TV+, advertising, and Apple Pay, among others — rose 12.1% to $19.6 billion, as it continues to be the tech giant’s catalyst for future growth. The company’s services segment is also more profitable than its products business at the moment. In Q3, the products segment posted a gross margin of 34.5%, whereas services enjoyed a gross margin of 71.5%, equal to a 169 basis points increase from a year ago. This year, Wall Street analysts expect the company’s top and bottom lines to expand 7.3% and 8.7% year over year, respectively, up to $392.4 billion and $6.10 per share.

During the quarter, Apple generated $20.8 billion in free cash flow (FCF), bringing its total over the past 12 months to a staggering $107.6 billion. Its unrivaled cash-flow generation not only opens the gate for share buybacks and dividend hikes, but it also comfortably allows the tech firm to invest in its long-term growth plans. Currently, Apple only pays a dividend of $0.23 per share, equal to a 0.56% dividend yield, so there’s plenty of room for expansion in that region. Nonetheless, the tech behemoth still managed to return $28 billion to shareholders during its third-quarter outing.

The next Warren Buffett stock on my list is Amazon (AMZN -0.99%). The world-class e-commerce company, which reigns over 38% of online retail sales in the U.S., has watched its stock price lower 16% year to date. In its second quarter of 2022, its total sales improved 7.2% year over year to $121.2 billion, while the e-commerce giant posted its second consecutive net loss with an earnings per share of negative $0.20.

Its online stores segment, which equaled 41.9% of sales during the quarter, dropped 4.3% to $50.9 billion, as the e-commerce industry continues to face an immense amount of pressure from high inflation and a reopening global economy. The patchy growth from its online retail business was partially offset by a strong performance out of its Amazon Web Services business, which soared 33.3% to $19.7 billion. Amazon Web Services, a cloud-computing platform, is the top dog in the cloud infrastructure arena, controlling one-third of the industry. According to Fortune Business Insights, the global cloud computing market is forecast to climb at a compound annual growth rate (CAGR) of 17.9% through 2028, implying that Amazon is advantageously positioned to benefit from the upward trend.

For 2022, analysts estimate the e-commerce mogul’s total revenue will increase 11.2% year over year, up to $522.5 billion, and its earnings per share will drop to $0.04, a notable pullback from its $3.24 per share a year ago. Next year should be a different story for Amazon as the economic backdrop clears up — the Street is forecasting its top line will grow another 15.6%, and its earnings per share will finish at $2.34, putting the e-commerce leader back on track. Even so, the company still possesses a cash and marketable securities position of $60.7 billion, which I think speaks for itself when it comes to Amazon being able to weather any economic storm.