Early each month, the U.S. Bureau of Labor Statistics (BLS) releases the latest data for the Consumer Price Index (CPI), a benchmark tracking the price movement on a wide range of goods and services that people use every day. Investors monitor the CPI to gauge the current state of inflation, which has been at a 40-year high for most of the year and resulted in aggressive interest rate hikes by the Federal Reserve, which is trying to rein in the high prices currently plaguing the country.

On Wednesday, BLS will release the data for how the CPI trended in July. It has the potential to move markets in a big way. Here’s why.

Inflation has been a raging headache for the market this year, leading to a huge sell-off of stocks. The first six months of the year ended up being the market’s worst opening half in 50 years. After two years of dulled economic activity and increased savings, consumer demand shot through a cannon in 2022, driving prices higher on almost everything. Supply chain issues and a tremendous amount of liquidity pumped into the economy by the Fed in recent years only added to the storm.

With equity valuations high, stock prices got crushed after the Fed indicated that it would aggressively raise its benchmark overnight lending rate, the federal funds rate, to slow the red-hot economy. The Fed’s response has led the market to believe that a recession of some kind is all but inevitable. The first half of the year included two straight quarters of negative gross domestic product (GDP) growth, marking what many consider to be a technical recession.

The Fed has now raised the federal funds rate by a range of 225 basis points (2.25%) to 250 basis points since March, and investors are starting to wonder if inflation has peaked yet. So far, the CPI hasn’t shown it. Economists projected that the CPI would rise 8.8% in June on a year-over-year basis. The CPI surprised the market by coming in 9.1% higher, meaning prices kept growing. 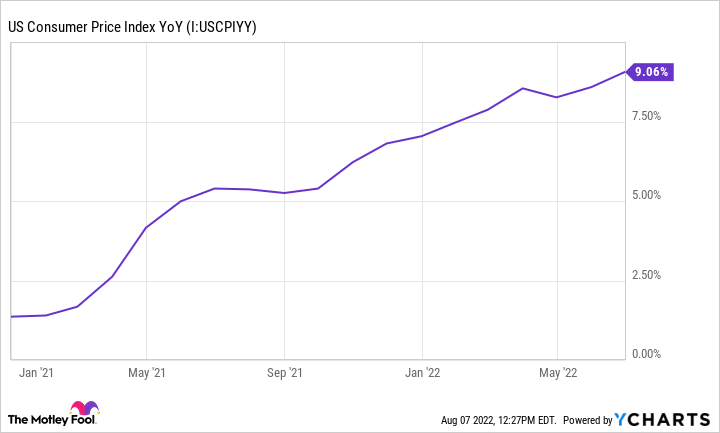 But the market seemed to find some relief in the new data, because a lot of the increase was driven by energy and gasoline prices, which have come back down in July, suggesting that inflation has perhaps peaked. The sentiment was further echoed when, following the Fed’s July meeting, Fed Chairman Jerome Powell said the Fed might be able to slow the pace of rate hikes later this year, but it would be depend on the data.

This makes the CPI reading for July particularly important, because it could be an indicator for how aggressively the Fed will move with rate hikes for the rest of the year. As such, the CPI reading Wednesday is likely to move markets heavily one way or the other.

What to look for

Investors are generally looking for data that shows inflation has peaked, thus leading the Fed to slow its aggressive bid to tame rising prices, which then makes it less likely the Fed will tip the economy into a severe recession.

Generally, that would mean a CPI reading for July that comes in at or lower than economists’ forecast of 8.7% year-over-year growth in July. The 8.7% forecast would mark a slowdown from June, but the devil is in the details.

At this point, given how energy and fuel costs have come down in July, investors likely expect to see some reduction in headline CPI growth. But if other consumer prices, such as those associated with food, transportation, and rent, stay elevated or rise, then investors still may worry about high inflation persisting and the Fed continuing on its aggressive path. The market will ideally want to see some slowdown in prices related to other categories aside from just energy to really get stocks moving higher. But it’s also possible the market is just looking to confirm that inflation did take a breather in July.

And then, of course, if the CPI comes in higher than the 8.7% projection, markets could struggle, especially considering declining energy costs. But investors should know that it’s difficult to predict the market’s reaction even if it seems logical right now. Just be prepared to see movement on Wednesday, and don’t try to trade around this near-term event. Stick to stocks that have good long-term prospects and stay patient.