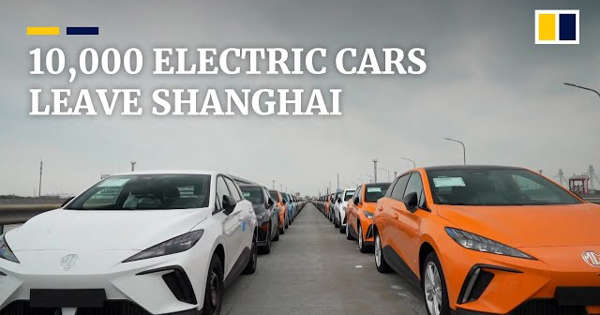 Shanghai, China’s primary commercial and financial hub, is banking on an electronic shopping coupon lottery to revive consumer spending and reclaim its pride as the mainland’s key economic growth engine.

The municipal government is pinning hopes on 1 billion yuan (US$140.5 million) worth of retail vouchers to encourage its 25 million residents to buy goods and services. The coupons will be doled out in a lottery system in three rounds through November, it announced in August.

The size of the handout, while small relative to the local economy, represents an attempt to spark life into the city’s retailing industry. A two-month lockdown in April and May under Beijing’s strict zero-Covid policy, rattled confidence and turned big spenders into budget-conscious consumers amid losses in job and stock markets.

Do you have questions about the biggest topics and trends from around the world? Get the answers with SCMP Knowledge, our new platform of curated content with explainers, FAQs, analyses and infographics brought to you by our award-winning team.

“The amount of subsidy has just symbolic value, but it is a clear sign that the mainland’s commercial hub is desperate to spur consumption,” said Chen Xiao, chief executive of Shanghai Yacheng Culture, a firm that deals with marketing and branding for retail companies. “Virus-control measures have already damaged thousands of retailers and restaurants. The ‘peanut’ incentive has buoyed spending sentiment to some extent.”

Shanghai residents aged above 18 can enter the lottery through online payment platforms such as UnionPay, WeChat Pay, and Alipay. The e-coupons offer a discount of as much as 100 yuan on a commercial transaction. The city’s government will reimburse the participating retailers.

About 44 per cent of 4.5 million people who participated in the first round in late August were awarded with e-coupons, the Shanghai commercial bureau said on September 20. Lu Shunxi, one of the winners, said the promotion sparked keen interest among retired workers.

“I mobilised my friends to take part in the lottery, and many of them felt elated when they won,” she said. “More importantly, the e-coupons acted as a catalyst for more purchases of daily essentials.”

The April-May lockdown delivered a major blow to the city. Shanghai’s economy may rebound in the second half with a step-up in infrastructure spending, after contracting by an unprecedented 5.7 per cent in the first six months this year. Officials are likely to accept there would be no growth in 2022, versus mayor Gong Zheng’s earlier projection for a 5.5 per cent expansion.

Electric cars: Beijing extends exemption from 5 per cent purchase tax to end of 2023 in boost for sector

“By leveraging on the 1 billion yuan coupons, actual consumer spending [by the lucky draw winners) could top 10 billion yuan,” said Eric Han, a senior manager at Suohei, a business advisory firm. “Shanghai residents are good at doing business and they will view the e-coupons as a boon.”

Chen Qun, a doctor in her late 50s, took her family to dine at a hotpot restaurant a day after winning one of the coupons, describing it as a payback to the local economy.

“A hotpot dinner cost me more than 300 yuan, and I paid just over 200 yuan after using the coupon,” she said. “The spending is worth it, and we should spend more to echo the city’s efforts to boost consumption.”

That could add momentum to the recovery in recent months. Retail sales in mainland China rose more than expected in August, gaining at an annual pace of 5.4 per cent, the government said last month. That accelerated from a 2.7 per cent growth in July, thanks to tax cuts that helped push car sales.

Retail sales in Shanghai shrank 12 per cent to 1.04 trillion yuan in January to August from a year earlier, the local statistics bureau said last month. Restaurants and hotels, one of the biggest casualties, saw revenue sink 27.5 per cent to 69.5 billion yuan.

“We hope local officials will distribute more e-coupons to residents in the future,” said Zhu Zhengrong, a restaurant owner in Pudong, Shanghai. “A total amount of 100 billion yuan [worth of e-coupons] is desirable.

‘Lying flat’ is no more: new evolution of disillusionment has frustrated Chinese youths ‘letting it rot’

Xi Jinping may ‘recalibrate’ after miscalculation of siding with Russia, Henry Kissinger says

This article originally appeared on the South China Morning Post (www.scmp.com), the leading news media reporting on China and Asia.