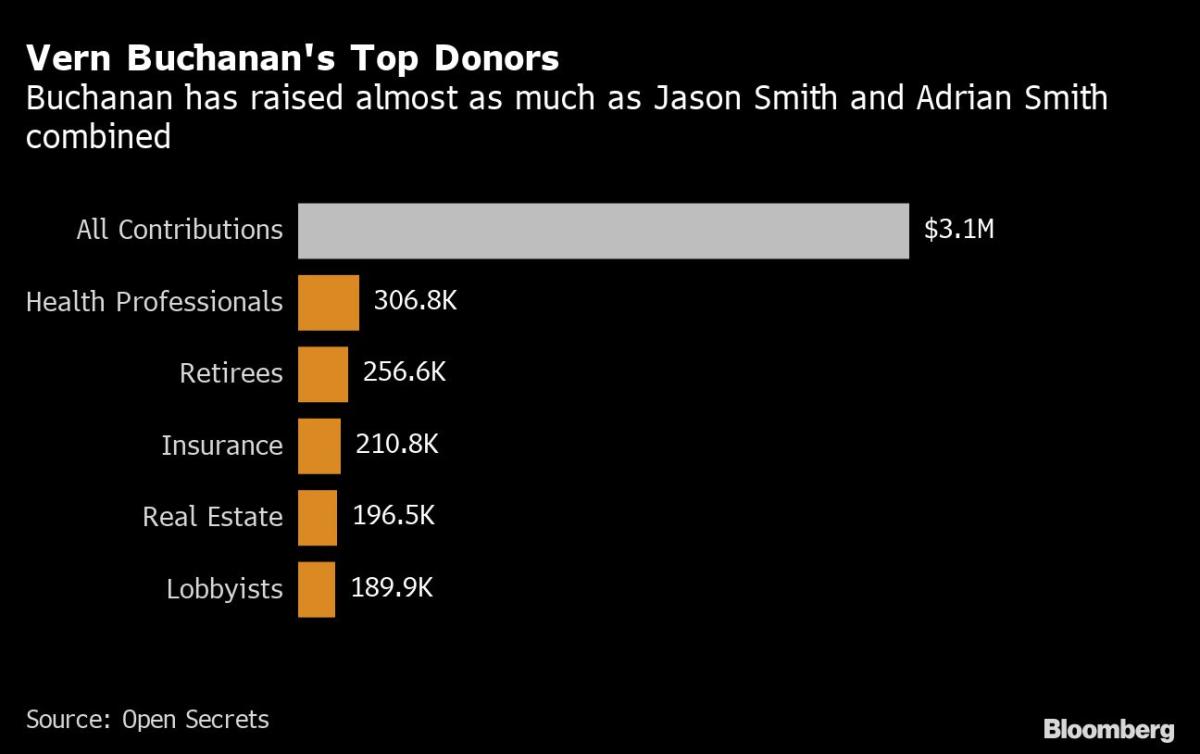 (Bloomberg) — The contest to lead the House tax-writing committee should Republicans win control of Congress in November may signal whether the GOP will maintain its traditional Wall Street-friendly stance or pivot more to Trump-style populist tax and trade policies.

The three lawmakers vying to chair the powerful Ways and Means Committee — Vern Buchanan of Florida, Jason Smith of Missouri and Adrian Smith of Nebraska — embody the ideological tension within the Republican Party.

The selection of Buchanan would indicate that, at least for tax and trade issues, House Republicans are looking to continue to let the business-oriented wing of the party lead economic policy. Jason Smith, who wants the GOP to be the party of the working class, would represent a shift in Republican economic strategy, highlighting the growing divide between the party and the business community. Adrian Smith would steer a middle course between those two, emphasizing a pragmatic approach to legislating.

Buchanan, one of the wealthiest members of Congress, and Adrian Smith, a lower-profile lawmaker focused on policy, would both have been clear top contenders in the pre-Trump era. But with more Republicans aligning with former President Donald Trump, Jason Smith, a deft politician and the current top Republican on the House Budget Committee, is a leading candidate despite having less seniority than the other two competitors.

Still, conversations with other House Republicans indicate the selection is a toss-up, one that will be made by a committee of mostly senior House Republicans, with House GOP Leader Kevin McCarthy and Steve Scalise, the No. 2 Republican, having a major say.

The Ways and Means Committee will be at the center of some of the biggest fights looming in Congress if Republicans win a majority of House seats in the November election as widely expected. That includes a coming fight over raising the federal debt ceiling to avert a disastrous default by the government and the fate of key elements of President Joe Biden’s tax and climate law. What the GOP won’t be able to achieve is substantial changes in policy. However a Republican-run panel would be able to begin setting an agenda for the 2024 presidential and congressional elections.

Here’s a look at how each of the candidates for Ways and Means would lead the panel:

Buchanan, 71, is running on his experience, in business and serving more than a decade of service on the committee.

“I’m very excited about trying to make America — when you talk about tax and trade — the best place to do business,” Buchanan, who represents a district surrounding Sarasota, said in an interview.

It’s his experience building a printing company and then a car dealership empire, that has caught the eye of corporate, donors and many of his fellow business-focused colleagues in the House who are keen to have someone sympathetic to business interests running Ways and Means.

Buchanan said his priority is keeping tax rates low and making sure that pass-through businesses — including limited liability companies and S corporations — have a tax level that are on par with corporations. He likely won’t have the power to enact new tax cuts or extend Trump’s 2017 levy reductions that are set to eventually expire, but he can do much of the legwork to prepare for that if Republicans achieve unified government control.

Buchanan is also interested in pursuing a wide array of trade deals, including with the UK, European Union, Taiwan. He also said he sees a “real opportunity” to combat Chinese influence by engaging more on trade with Africa, where the Chinese have built infrastructure and expanded mining operations.

But Buchanan’s aspirations on trade, as well as his more moderate views on energy and the environment, could put him at odds with some others in his party, particularly in the House where Trump has more sway over policy than the US Chamber of Commerce.

Jason Smith, elected to Congress in 2013, lacks the seniority of both of his opponents. But he’s hoping to make up for that by building alliances with his colleagues, including campaigning in nearly 70 congressional districts with fellow Republicans.

“We are the party of the working class. We are not the party we had 10 years ago,” he said. “I represent the base of our party. I have the best pulse on where we need to move on policies.”

He touts his connections to the conservative House Freedom Caucus, as well as the recently renamed group of moderates, the Republican Governance Group. As a frequent guest on Fox News and Newsmax, he uses those platforms to promote Trump as the leader of the party.

Smith, 42, has served as the top Republican on the House Budget Committee for the past two years, where he has honed his political message on inflation and spending. Smith, along with Senator Lindsay Graham of South Carolina, the top Republican on the Senate Budget Committee, were behind a request for a Congressional Budget Office report showing Biden’s Build Back Better plan would cost nearly $5 trillion, which led to Senator Joe Manchin killing the deal.

His policy goals if he were to be chairman include: oversight of the Internal Revenue Service, as well as “woke corporations” that have “become beholden to China”. He said he also wants to deal with the trade deficit, make sure trade agreements protect American workers, work toward US energy independence and overhaul the welfare system.

Smith is a political animal and owns political animals — a drove of donkeys all named after Democrats: Hillary, Pelosi, Bill, AOC, Chelsea and Joe. They guard the sheep on his southeastern Missouri ranch.

Adrian Smith is not as well known outside Washington, but he says his record of being in the weeds on policy and his track record as a team player gives him an edge.

“I think it’s important that we actually legislate,” he said in an interview. “I think I’m the one who can get the most done.

Adrian Smith, 51, has chaired several of the subcommittees housed within Ways and Means and was involved in the development of the House Republicans’ Commitment to America plan, which calls for lowering the cost of living through tax cuts, reducing spending, and ending dependence on China.

His district is consistently one of the largest agriculture products exporters, and he’s one of the most involved lawmakers regarding trade policy. He said he sees the possibility for bipartisan trade deals to promote the American agriculture industry. He also said he would seek to strategically use oversight power, particularly over the IRS.

Smith also touts his strong connections with his colleagues, including mentoring younger members – an approach he said he would continue as chairman. He’s also a former Washington roommate of Kevin McCarthy – who is vying to be the next House speaker of a GOP House.