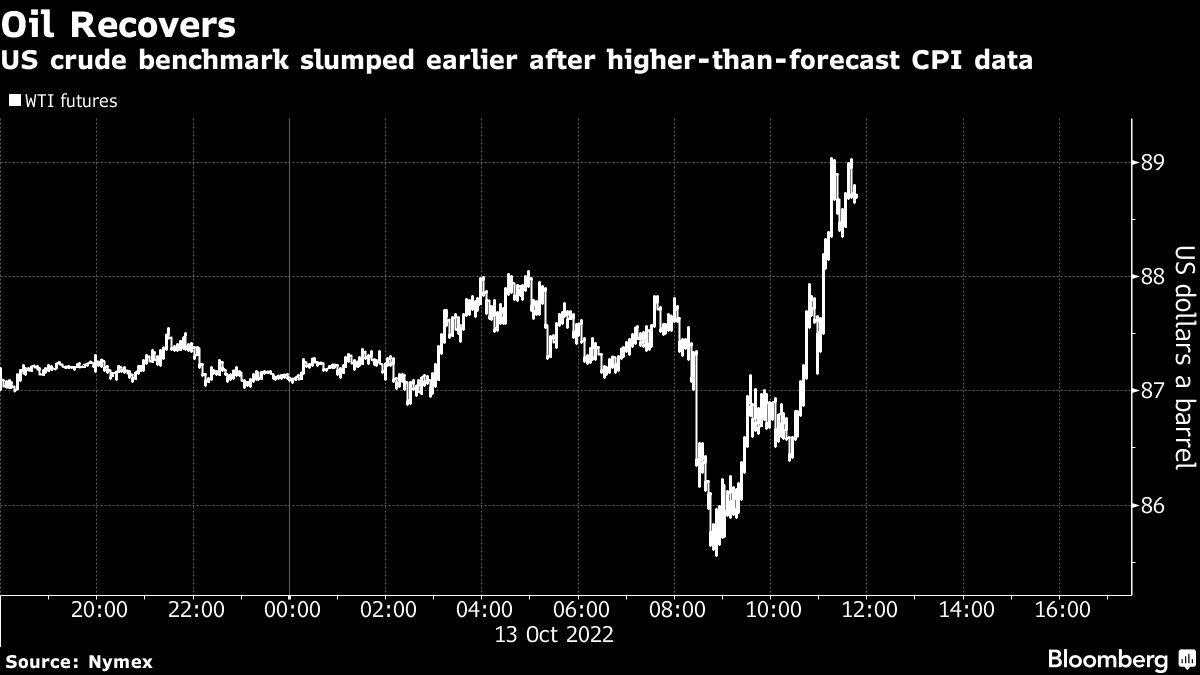 West Texas Intermediate futures settled near $89 a barrel after draws from distillate stockpiles and US strategic oil reserves signalled the potential for market tightness on the horizone, despite a larger-than-forecast 9.9 million barrel build in crude inventories. US equities recovered and Treasury yields fell back from highs as traders mulled the Federal Reserve’s next moves following the inflation report that bolstered the likelihood of further interest rate hikes, potentially threatening the growth outlook.

“It’s a super bearish headline, but if you look at the underlying data, it tells a different story,” said Matt Sallee, portfolio manager at Tortoise when referring to this week’s Energy Information Administration report. “The combination of a big distillate draw, another big SPR draw and then a reversal in the exports — I think if you back those things out, this was probably a more bullish report.”

WTI futures sank over the prior three sessions on recession fears and moved below the 50-day moving average in intraday trading Wednesday and earlier Thursday, indicating the potential for higher prices.

Earlier in the session, the International Energy Agency warned that production cuts agreed earlier this month by the Organization of Petroleum Exporting Countries and its allies risk causing oil prices to spike and tipping the global economy into recession.

The IEA report came as the outlook for global supply becomes ever more clouded. On Wednesday, the US cut its estimates for domestic oil output, making significant reductions to its 2023 estimates. Meanwhile, some Biden administration officials are growing concerned that a plan to cap the price of oil purchased from Russia may backfire, particularly after recent OPEC+ supply cuts.

Read more: Further cut to US oil output poses another challenge for world thirsty for crude

Crude rallied in the immediate aftermath of the cartel’s decision, pushing prices back up toward $95 amid a tighter supply outlook. Traders have also been grappling with risks to energy infrastructure after the Nord Stream pipeline was sabotaged and Russian President Vladimir Putin said any infrastructure in the world is at risk after the incident.

There’s been a flurry of bullish oil option activity in recent days, with WTI call option volumes on Wednesday hitting the highest since 2019. The increase was driven in part by a series of wagers that prices could rally into the $120s.

On Wednesday, minutes from the Federal Reserve showed officials committed to raising interest rates to a restrictive level in the near term and holding them there to curb inflation, potentially slowing growth.