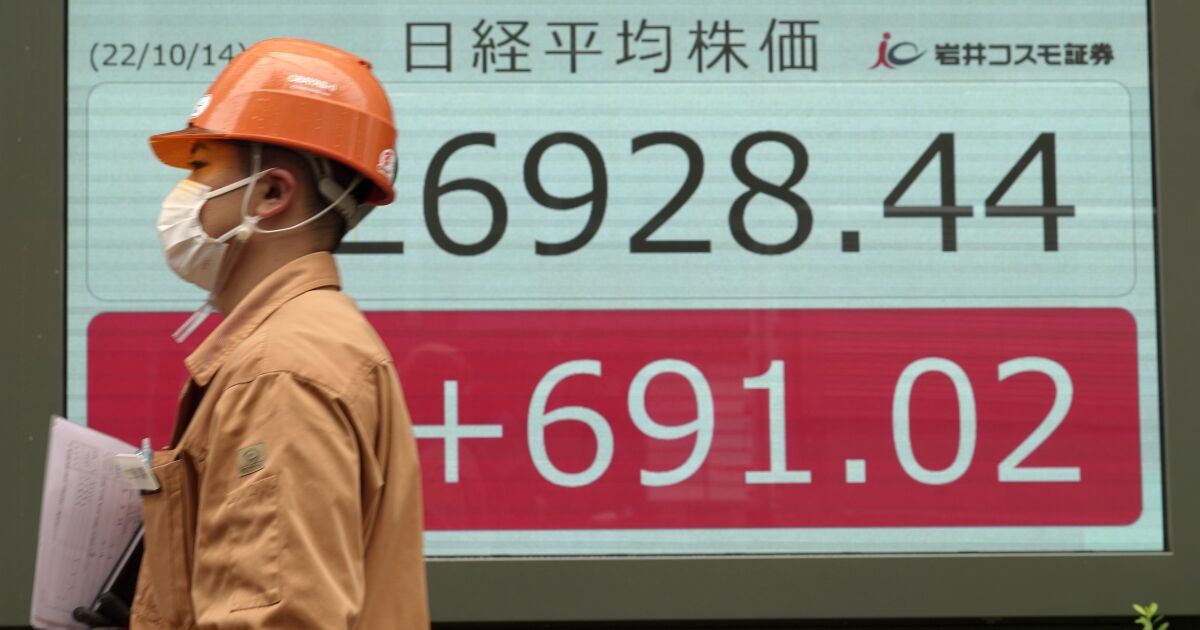 Wall Street’s benchmark S&P 500 index tumbled Thursday after the U.S. consumer price index for September rose 8.2%. But the market benchmark quickly rebounded to end up 2.6% for its biggest daily gain in 2 1/2 years.

The “sticker shock” of inflation was “shrugged off,” possibly because traders already expect another sharp interest rate hike from the Federal Reserve next month to cool surging prices, said Vishnu Varathan of Mizuho Bank in a report.

The Fed and central banks in Europe and Asia have raised rates by unusually wide margins this year to contain inflation that is at multi-decade highs. Traders worry they might tip the global economy into recession.

On Wall Street, the S&P 500 rose to 3,669.91 on Thursday following a swing of five percentage points from its lowest point during the day.

Also Friday, China reported consumer inflation rose to a 29-month high of 2.8% in September from the previous month’s 2.5%. That was below the official ceiling of 3%, leaving Beijing room to stimulate weak economic growth.

The U.S. government data on Thursday showed inflation is spreading more widely across the economy. One component that is closely followed by policy makers and investors accelerated to its hottest level in 40 years.

The CPI was down from August’s 8.3% increase but not as much as expected.

Core inflation, which strips out volatile food and energy costs to show the long-term trend, accelerated to 6.6% from August’s 6.3%. Prices in September rose 0.6% from the previous month.

That appeared likely to reinforce Fed plans for more big rate hikes. Most traders already expected a rise of up to three-quarters of a percentage point, three times its usual margin, at the U.S. central bank’s next meeting in November.

Thursday’s data prompted some investors to expect yet another rate hike of the same size in December.

The yield on the 10-year Treasury, which helps set rates for mortgages and many other loans, rose to 3.96% from 3.90% late Wednesday. Earlier in the day, it topped 4%.

In energy markets, benchmark U.S. crude rose $2.11 to $89.38 per barrel in electronic trading on the New York Mercantile Exchange. Brent crude, used to price international oils, gained 22 cents to $94.79 per barrel in London.