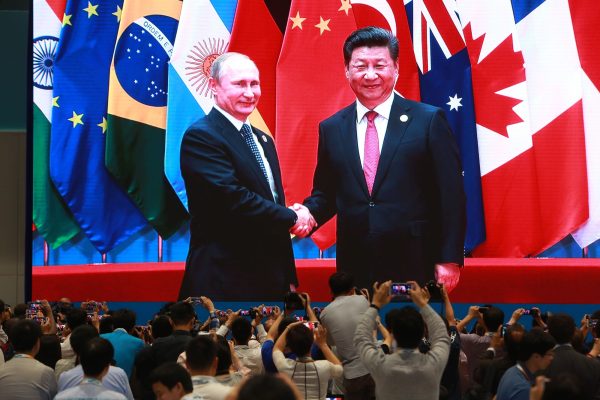 The Russia-Ukraine War has generated an unprecedented disaster for Russia’s aircraft industry, which might provide China the opportunity to access advanced aero technologies that Moscow refused to provide before. After Russia invaded Ukraine, Western countries imposed the most comprehensive sanctions and export controls since the end of the Cold War, rendering Russia unable to manufacture advanced military hardware for war and arms export. Although Moscow has sought arms assistance from Beijing, China seems reluctant to buttress Russia overtly. However, economic support from Beijing has deepened Moscow’s reliance on China. It might increase China’s bargaining power to acquire advanced aero technologies from Russia, given that Beijing may be the only possible savior to Moscow’s waning aerospace industry after the invasion.

Since the end of the Cold War, China has enhanced its strategic air power through arms acquisition from former Soviet states. Most importantly, after the Taiwan Strait Crisis in 1996, deterring the intervention of the U.S. in the West Pacific has been a priority for the People’s Liberation Army (PLA). The strategic bomber is seen as the key for China to employ its Anti-Access/Area Denial tactics; for example, the upgraded Russian-made Tu-22M3M Backfire, equipped with hypersonic missiles, can render U.S. Navy fleet defense ineffective.

Hence, Western countries were concerned that China might acquire the Tu-22M, Tu-95 Bear, and Tu-160 Blackjack, the backbone of Soviet strategic air power. However, China still relies on H-6 variants, the Chinese version of the obsolete Tu-16 Badger, because both Russia and Ukraine had been reluctant to sell the strategic weapon to China.

Get briefed on the story of the week, and developing stories to watch across the Asia-Pacific.

Building a strategic air force is also part of China’s “Strong Military Dream.” Beijing believes that the “China Dream” needs to be supported by the “Strong Military Dream,” meaning in the aerospace context that the People’s Liberation Army Air Force (PLAAF) would become a modernized strategic air force by 2035 and a world-class strategic air force by 2050. After years of modernization, China achieved a greater degree of air superiority since it developed fifth-generation fighters, but was weak in bombers and precision strike capabilities. To overcome this, China is developing long-range and medium bombers simultaneously; one may play the role of a stealth strategic bomber, and another would be similar to the Tu-22M as a countermeasure to U.S. aircraft carrier groups.

However, propulsion remains an issue when Beijing develops next-generation aircraft, limiting China’s ability to manufacture strategic bombers. Once China can upgrade its manufacturing capabilities to produce next-generation bombers, it could change the regional military balance and pose a severe threat to U.S. military assets. Therefore, if China can access Russia’s sensitive aerospace technologies, the PLAAF would have a shortcut to building strategic air power.

On the one hand, Russia’s invasion of Ukraine generates difficulties for Moscow in developing next-generation aircraft. Although aircraft made up 50 percent of Russia’s arms exports, a lack of funding makes it difficult for aircraft industries to support developing programs. For example, Russia’s next-generation stealth bomber, the Tupolev PAK DA, is struggling with insufficient resources, and so are other ongoing programs, including the MIG-41, Su-75, and A-100.

On the other hand, the war also marked the end of Sino-Ukrainian arms sales, giving China no alternative except Russia. China failed to acquire the Ukrainian jet engine company Motor Sich under U.S. pressure last year, and Russia destroyed its factory in Zaporizhzhia in August, rendering a potential takeover by China a moot point. Moreover, the current solid relationship between Kyiv and NATO will prevent China from accessing Ukraine’s military technology and leave Russia the only option for China.

For Russia, arms deals with China once sustained Moscow’s nearly collapsed defense industry after the dissolution of the Soviet Union. Although Sino-Russian arms sales have shrunk since 2006, the Crimean crisis in 2014 revived bilateral military cooperation between the two countries. After triggering international sanctions and isolation, Russia approved the sale of its most advanced Su-35 fighters and S-400 missiles to China for financial and diplomatic support. The arms sale and the following technology transfer in submarines, helicopters, and the early warning radar system have impacted the regional military balance in Asia.

This time, because of Russia’s invasion of Ukraine, Russia’s arms exports have dropped drastically due to potential clients, including India, halting arms deals with Moscow. Russia will need to provide more advanced equipment to attract China to fill the gap in the losing market.

Additionally, Russia’s weakened aerospace industry is unable to respond to the Western expansion of military power. For instance, NATO decided to increase the number of F-35s in Europe from 450 to 550 by 2030, whereas Russia manufactured only 16 Su-57s over the past 10 years. Meanwhile, Beijing also worries that it might be surrounded by over 300 F-35s in the Indo-Pacific by the next decade. The shared destiny of the two countries provides a critical opportunity for deepening military cooperation.

During the ongoing Russian-Ukrainian War, China has helped to bolster Russia’s economy in the wake of western sanctions. In 2022, bilateral trade rose 29 percent in the first half year. In high-tech industries, it also forced Russia to turn to China for microchips and help rebuild its own technology sector. Increasing Russian dependence on China will put Moscow in a relatively disadvantageous position in arms sales with China, regardless of concerns about intellectual property theft and reengineering concerns. In return for China’s support, Moscow might be willing to provide Beijing with the aerospace equipment or technologies that it has been eager to obtain, including strategic bombers and jet engines, but which Russia has previously withheld.

China and Russia share the idea of weakening American power and recognize that distracting the U.S. attention between Ukraine and Taiwan will strengthen both of their regional positions. The pressure on Russia’s European front is likely to be mitigated by China’s improvement of its military capability in the Asia-Pacific, and China will benefit from the potential military-technologies cooperation with Russia to achieve Beijing’s “Strong Military Dream.” Along with the Russian army repeatedly being defeated and its industries in tatters, the possibility of China accessing Russia’s military technologies will rise.

Disclaimer: The opinions expressed in this article are those of the authors. They do not purport to reflect the position of the Taiwanese government.