Ashmore suffered a sharp drop in its assets under management as investors fled amid the turmoil hitting global stock markets.

The FTSE250 investment manager, which focuses on emerging markets such as India, Brazil and Mexico, reported that its assets under management had dropped by £7.1billion to £50billion in the three months to the end of September.

Ashmore also clocked up £2.7billion in investment losses as surging inflation, the war in Ukraine and rising interest rates battered markets around the world. 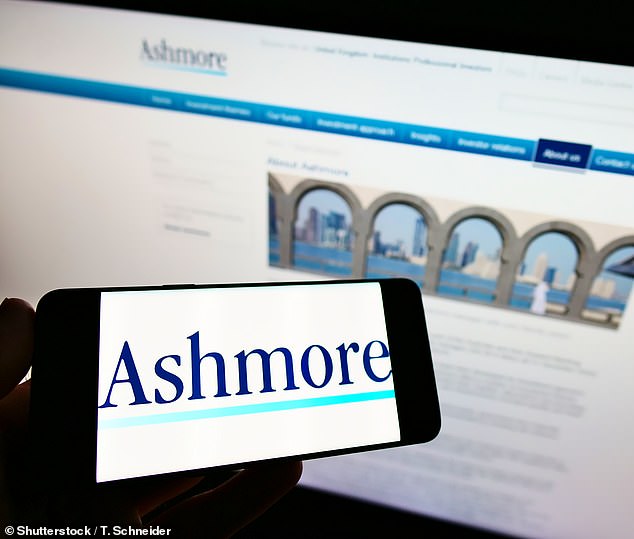 Turmoil: The FTSE250 investment manager reported that its assets under management had dropped by £7.1billion to £50billion in the three months to the end of September

The firm said the outflow of assets was mainly due to institutional investors cutting back their exposure to debts and currencies.

Emerging markets have been at the sharp end of the downturn as growing fears of a global economic slowdown prompted investors to rush towards havens such as the US dollar.

Stocks in emerging economies have dropped by nearly 30 per cent since the start of 2022 and are heading for their worst annual performance since the 2008 financial crisis. Meanwhile, emerging market government bonds have also dropped 23 per cent in the year-to-date.

Ashmore boss Mark Coombs said the decline over the quarter reflected ‘continued uncertainty around geopolitical risks, higher inflation and increasingly hawkish central banks’. He added this had ‘increased the risk of recession’ across multiple countries and as a result investors had ‘limited’ appetite for risk causing them to pull out of the market.

Analysts at broker Peel Hunt said the figures were ‘a little worse’ than expected and that the general aversion to risk among investors was ‘unlikely to change any time soon’. Meanwhile, investment bank UBS trimmed their target price on the stock to 235p from 260p after what analysts said was ‘another tough quarter’ for the group.

Markets ended a volatile week on a high note as traders took heart from signs the Government may be on the cusp of reversing more parts of the mini-Budget after Kwasi Kwarteng was sacked as chancellor after just 38 days in the job.

But Susannah Streeter, analyst at Hargreaves Lansdown, said despite Kwarteng’s departure Prime Minister Liz Truss was now facing a ‘horror show of her own making’ and the ’embarrassing reshuffle’ had significantly damaged the Government’s credibility.

‘There will be a long way to go and significant bridge building ahead before the UK risk premium disappears,’ she added. The FTSE100’s rise was supported by shares in UK-focused banks amid hopes the Government’s reversal could provide some support to the faltering economy.

Shares in online supermarket Ocado also surged 4.8 per cent, or 21p, to 456.8p as the stock extended gains following news on Thursday that one of its customers, US supermarket giant Kroger, is merging with rival Albertsons.

Recession fears were continuing to put pressure on oil prices, with Brent crude hovering around $92 a barrel.

Mid-cap oil rig builder Petrofac surged 4.5 per cent, or 4.25p, to 99.55p after Peel Hunt upgraded the stock to ‘buy’ from ‘hold’ highlighting new contract wins for the firm as well as predictions of rising energy demand over the coming years.