The S&P 500 (SP500) on Friday posted its fourth weekly loss in five, falling 1.55% for the five-day session. Inflation worries dominated headlines during the week, with the Federal Reserve saying it was committed to its aggressive rate-hike stance in response and that it didn’t see inflation slowing. The week also saw the earnings season kick off with major U.S. banks reporting their results.

Thursday was an especially wild day for the benchmark index, a trading session in which it hit a near 2-year low after the release of hot retail inflation data, only to then rally and end nearly nearly 100 points higher, sparking speculation about having hit a bottom. The comeback allowed the index to snap a six-day losing streak.

Minutes from the Fed’s September meeting released on Wednesday showed policymakers acknowledging that their rate hike path would weigh on economic activity in the coming months and years. The central bank is widely expected to raise interest rates at its next meeting in December by at least 75-basis-points, which would be its fourth hike by that margin.

The week also saw earnings season unofficially begin with the release of quarterly results from major U.S. banks including bellwether JPMorgan (JPM), Wells Fargo (WFC) and Morgan Stanley (MS). Next week the season will kick off in earnest, with major names reporting numbers.

8 of the 11 sectors in the S&P 500 (SP500) closed in the red for the week, with Consumer Discretionary the top loser amidst rising inflation. Information Technology and Utilities also dragged the benchmark index. Consumer Staples, Health Care and Financials were the only sectors to end in the green. See below a breakdown of the weekly performance of the sectors as well as the performance of their accompanying SPDR Select Sector ETFs from Oct. 7 close to Oct. 14 close:

Below is a chart of the 11 sectors’ YTD performance and how they fared against the S&P 500. For investors looking into the future of what’s happening, take a look at the Seeking Alpha Catalyst Watch to see next week’s breakdown of actionable events that stand out. 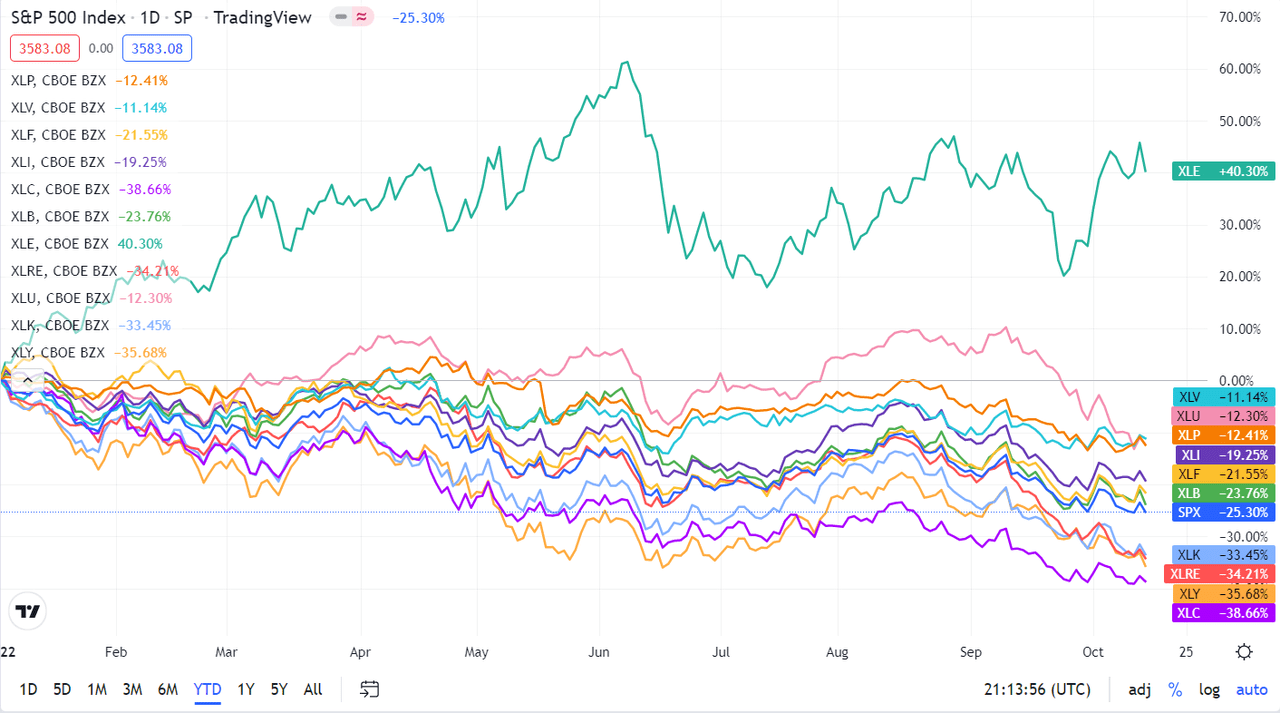