As the economic slowdown deepens, the Fed’s challenges grow larger. It increases the risk of policy mistakes that could benefit gold.

Inflation Is Still a Challenge

It was a tough year for the Federal Reserve. The U.S. central bank’s inflation forecasts were embarrassing. In December 2021, it projected the PCEPI inflation rate at 2.6%, while it soared to 6.8% through June. The Fed disclosed $300 billion in unrealized losses on its assets as of the end of March, showing the negative impact of rising interest rates on the market value of the Fed’s balance sheet (that likely only intensified since Q1). There was a trading scandal with two top officials resigning.

The real challenges are still ahead of Powell and his colleagues. They are caught between a rock and a hard place. The rock is, of course, inflation, which was caused by the huge increase in the money supply in response to the pandemic. At its current level, above 8%, it’s intolerable and must be curbed. However, the hard place is an economic slowdown. The Fed continues its tightening cycle, but it might be too complacent about the strength of the labor market and overall economy.

Indeed, the OECD’s leading indicator of U.S. economic activity has been on a decline for months, as the chart below shows, while the latest PMI data shows a steep fall in output across the US service sector and the fastest fall in activity since May 2020. 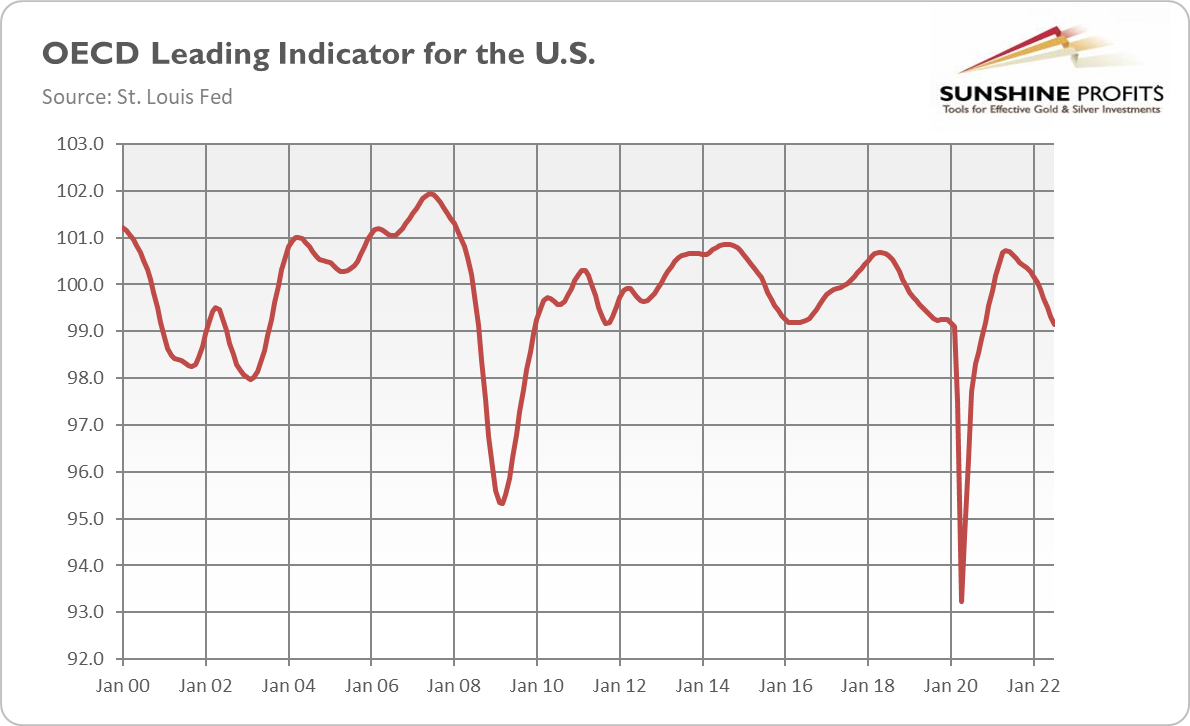 The S&P Global US Sector PMI is really worrisome, as it shows a broad-based contraction in the private sector:

US private sector firms signalled a broad-based decline in output during August, as all seven monitored sectors registered contractions in business activity. It was only the second time on record (since October 2009) that all sectors had seen a decrease in output, the first time having been in May 2020 during the initial wave of COVID-19.

No recession risk, huh? You see, the problem is that the economy is already on the brink of recession, but the Fed hasn’t yet shown its hawkish claws. What I mean here is that with the federal funds rate at about 3% and inflation at 8.3%, the real interest rates are still deeply negative, below minus 5%, and the fiscal policy is also accommodative (although less than last year).

Indeed, the Fed never managed to engineer a soft landing during such high inflation.

The tightening of monetary policy initially hits only the most interest rate-sensitive sectors, such as housing, but it will affect the entire economy ultimately. The Fed reacted to inflation too late, but now – because of this delay – it could overreact, given the state of the U.S. economy, pushing it into recession.

The Fed may also overstate the level of liquidity in the markets. So far, financial conditions seem to be just fine, while markets have ample liquidity. However, liquidity is very tricky as there is plenty of it – until it isn’t! History teaches us that during financial crises, liquidity quickly evaporates. The strengthening dollar only aggravates the problem, as it’s draining global liquidity and tightening conditions violently for large parts of the international financial system.

What does it all mean for the gold market? Well, the Fed’s trap is fundamentally positive for the yellow metal. For now, the Fed remains relatively hawkish, which boosts the dollar and puts gold under downward pressure. However, when the unemployment rate starts to increase and the next economic crisis begins, the Fed will have to – as a lender of last resort – reverse its course and adopt a dovish stance again. Many analysts are skeptical about the dovish pivot, but this is exactly what history suggests, especially given the level of private and public debt. 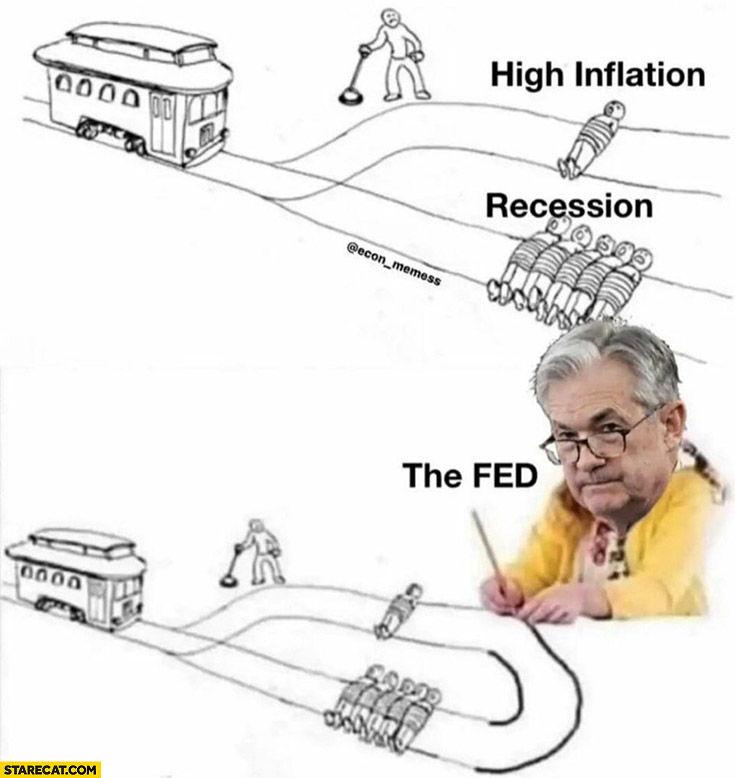 As recession is likely to be accompanied by still high inflation, the macroeconomic environment will be quite stagflationary, which should also support gold prices through low real interest rates and elevated demand for gold as an inflation hedge and a safe-haven asset. Additionally, in such an environment, there is a high chance that monetary policy will be “whipsawed, seemingly alternating between targeting lower inflation and higher growth, but with little success on either,” as Mohamed A. El-Erian puts it. This scenario is illustrated in the picture above, and it wouldn’t be good for the U.S. economy. But gold could finally shine then.