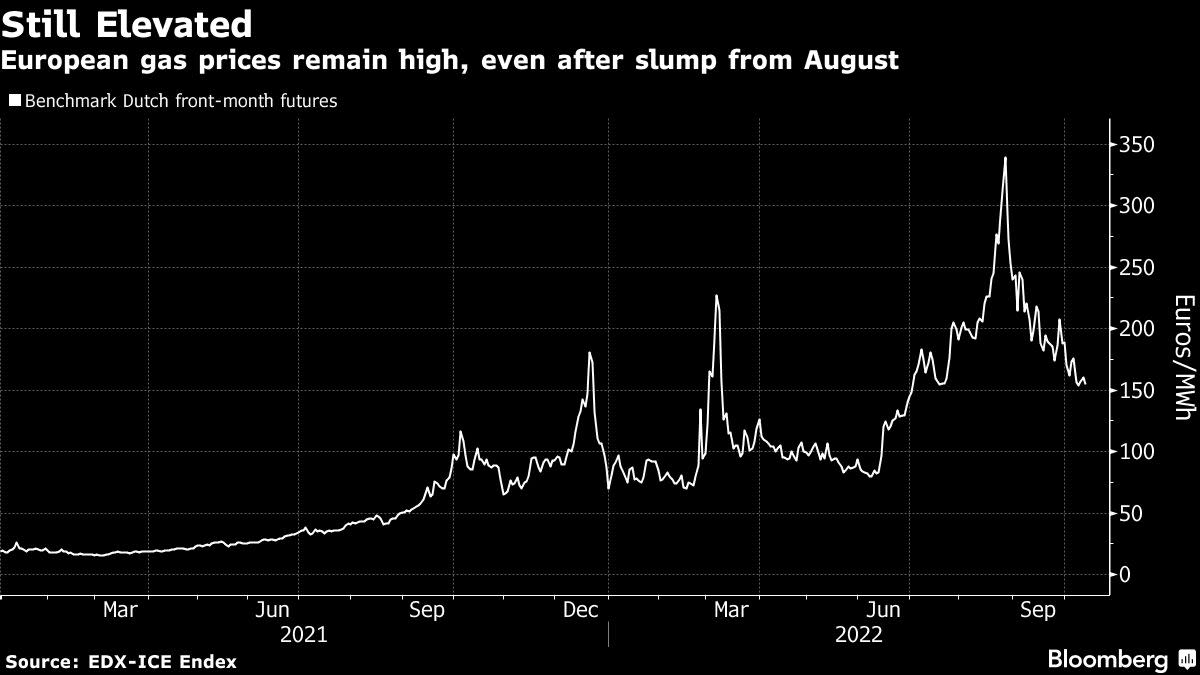 (Bloomberg) — Commodities are entering a crucial period as earnings season gathers pace, Europe firms up its energy-crisis response, and China’s political elite gathers in Beijing for a twice-a-decade summit.

Companies due to weigh in on this year’s wild markets include aluminum producer Alcoa, oilfield giant Schlumberger, and, for battery materials, Elon Musk’s Tesla.

China’s Communist Party congress opens Sunday with a speech by President Xi Jinping that should describe — in very broad terms — his thoughts on where the world’s no.2 economy is headed. Any allusions to Covid Zero, debt deleveraging or balancing development with security could steer prices for Monday’s open. A fresh batch of Chinese economic numbers also land next week to underscore what’s at stake.

European Union leaders will lay out their proposals to tackle the energy crunch at a Brussels summit on Tuesday, while the world’s top miners Rio Tinto and BHP offer quarterly output updates on Tuesday and Wednesday. Filling out the agenda, the latest US soybean crush numbers come with exports under threat, and there’s also a major precious metals conference.

There’s speculation that Xi could drop the Communist Party’s long-standing commitment to economic development as its top priority. That might be seen as bookmarking an end of sorts to the country’s two-decade raw materials boom. China’s slowdown would likely have been the biggest commodities story of the year, were it not for Russia’s invasion of Ukraine, and the nation’s demand outlook across energy, metals and food is still highly uncertain.

Roughly a week after Xi’s first speech, the line-up of the party’s top team will be unveiled and scrutinized for further clues on priorities and the extent of the president’s power. Before that, there’s a data dump on Wednesday that will provide a snapshot of the current state of the economy. Third-quarter figures include everything from GDP growth to steel and energy output, property investment and retail sales.

All eyes are on the European Union’s efforts to help ease an unprecedented energy crisis that threatens to tip the region into recession. The European Commission — the EU’s executive arm — will lay out its proposals on Tuesday after weeks of discussions. There’s still division among the bloc’s 27 members, but time is running out before winter. If all goes well, the Commission will form a plan for EU leaders to discuss at their summit on Friday and Saturday. Then, a final version could be approved by energy ministers at an emergency meeting in mid-November.

For now, markets remain jittery. Benchmark natural gas prices have slumped from a peak in — thanks in part to rising stockpiles and imports of liquefied fuel — but they’re still almost five times higher than normal for the time of year. Russian supplies to the region are curtailed in the wake of the nation’s invasion of Ukraine. And in recent weeks, a series of suspicious incidents have damaged infrastructure in Europe. Russian President Vladimir Putin says any energy infrastructure worldwide is at risk following explosions on the Nord Stream pipeline last month.

Alcoa, the largest US aluminum maker, reports earnings after Wednesday’s close of trading. Investors will be watching for more insights following a pretty downbeat outlook provided last month, when the Pittsburgh-based producer warned of being squeezed by “stubbornly high” costs and lower aluminum prices.

Since then, another issue has emerged: the prospect of fresh supply turmoil. The London Metal Exchange started talks with clients across the globe as to whether it should ban deliveries of Russian metal to its warehouses. More recently, Bloomberg News reported the Biden administration was weighing a prohibition on all imports of Russian aluminum. Such a move could be positive for Alcoa and other American producers that could replace supply for consumers in the US. Other metals earnings next week include copper miner Freeport McMoRan and China’s Zijin Mining.

Global oil and natural gas markets may get a fresh sense of direction as two of the world’s biggest energy services contractors report earnings next week. When Baker Hughes Co. kicks off oilfield earnings Wednesday, investors will look for the latest on developments in liquefied natural gas supply. Europe is scrambling for the heating and power plant fuel amid Russia’s war with Ukraine.

Schlumberger, the No. 1 global oil-services provider, will deliver earnings next Friday and offer its latest views on how supply-chain snarls and inflationary costs are hitting clients and where explorers plan to boost hydrocarbon supplies into next year.

US soybean exports are under threat. The country’s oilseed rival Argentina devalued its currency in a bid to boost exports of the beans just as farmers in North America were getting set to harvest. To make matters worse, water levels on the key US export channel of the Mississippi River are falling due to drought, slowing the amount of supplies flowing to the Gulf of Mexico and raising shipping costs to a record.

With exports under threat and supplies starting to pile up from the harvest, attention is shifting to the domestic crushing sector to pick up the slack. Traders will be watching to see if the National Oilseed Processors Association, a trade group representing most US soy crushers, reports another year-on-year increase in processing for September. The data is due Monday, when the US Department of Agriculture will also provide an updated status of the fall harvest.