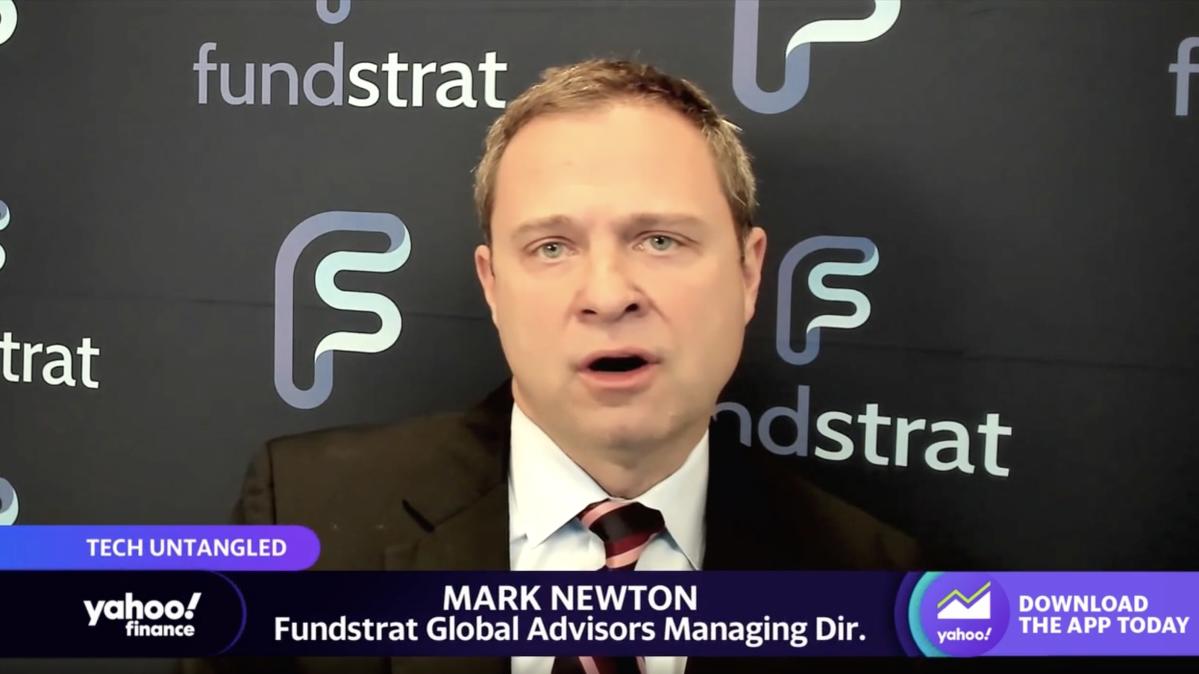 JULIE HYMAN: Tesla has faced steep declines in the past year. We’ve talked a lot about it. It’s down over 60%.

Our next guest says while the stock is oversold, the bottom has perhaps not yet come. Fundstrat Global Advisors managing director Mark Newton joins us now. Mark, good to talk to you. It’s been a while. So talk to us about what you’re seeing in the charts here that leads you to believe perhaps there’s some more downside for Tesla.

MARK NEWTON: Well, I think, if anything, you know, one should look at it from the opposite perspective as why should there be a bottom when a stock has been down over 60% in just the last 3 and 1/2, 4 months? I think, you know, as we approach a new year, everybody always likes to say, well, it’s oversold, and therefore we can just step in and immediately expect mean reversion, but, you know, technical analysis doesn’t really work that way.

And anything– you know, if 2022 has taught us anything, it’s that, you know, it’s almost a fallacy to expect that we can just run in and buy our favorite names just because they’re down substantially when we’re still within a bear market.

So yes, Tulsa is now officially oversold. We’re getting closer to targets that I think are meaningful. But, you know, a few months ago I did a number of different interviews, and we took a look at cycles and counter-trend exhaustion techniques and a lot of things that people like myself using technical analysis like to do.

And at the time, it broke $206 back in early November. That’s when Musk was selling shares. And that indicated this break of a giant head-and-shoulders pattern should start to lead the stock lower. Volume expanded on that, really confirming the breakdown.

And so, you know, I’m looking right down under $100 right before Tesla’s earnings happen right towards the end of the month, and that’s when a lot of my own cycles start to show the chance for a bottom. We could bottom and start to rally into the spring. But, you know, I think just looking at a few-point bounce today, it’s up– you know, it’s up, I think, at $119 already. Still difficult for me from a momentum standpoint to think that lows are in and also from a cyclical standpoint, so my work is not lining up just yet.

BRIAN SOZZI: Mark, what is counter-trend exhaustive analysis, and how does that apply to Tesla right now?

MARK NEWTON: Well, it’s one of the tools in my toolkit. I look at the work of Tom DeMark, DeMark indicators for evidence of exhaustion, not only of uptrends but downtrends, and I use them amongst many different frames and on many different indices and stocks. And so those are helpful to be able to buy dips within downtrends and also to sell when something is reaching a possible peak.

And so looking at a weekly chart of Tesla, it’s simply early by about two weeks right now to think that there’s a potential low. So that’s why I looked at when Tesla’s earnings were, all of those line up towards the latter part of January. So it makes a little more sense for me that initially this little bounce might be sold, but pulling back over the next couple of weeks would offer some opportunity for traders that might be looking to time better entries.

BRAD SMITH: Mark, I ask this from a place of intrigue and not from a place of pushback, but isn’t Elon Musk a bit of an anomaly when it comes to some of the traditional ways to apply technical analysis given the strength and just velocity of selling that he was doing so that he could finance buying another company?

MARK NEWTON: Well, if anything, as I’ve been trying to talk to investors about over the last 25, 30 years, you know, it’s really important to take the blindfold off and realize that all this news or, you know, an outside influence, somebody like Musk, really has very little to do as to how a stock can move on a day-to-day basis.

You know, many people, as you remember, doubted Tesla literally all the way up as it was moving higher. You know, and even on the first pullback now, now everybody’s on board and believes Tesla. And as it’s falling, they’re all trying to say, well, the stock is bottoming, and it’s clearly a buy because it’s undervalued.

You know, look, that’s human nature. We all want to buy low and sell high. You know, if anything, my work suggests that it’s almost always better to concentrate on those stocks that are hitting new all-time-high territory versus looking to buy dips when the market is still within a bear market.

So to answer your question, I don’t know that Musk is, you know, necessarily– everybody thinks now that he’s distracted or that supply and demand– demand is slowing. Supply is up, and those are reasons maybe not to buy. And so you can actually take those fundamentals along with the technicals and say that it’s probably still a little bit early to think that Tesla has made a bottom.

JULIE HYMAN: One of the other– just to dig a little bit more into your analysis of Tesla specifically, Mark, I know you’re looking at cycle analysis also, and we have a chart of that from your note. Can you sort of explain, as much as you can, in layman’s terms? Sort of explain that to us.

And you also mentioned that, you know, Tesla might not bottom in the near term, but it sounds like further out, you think maybe it could. When will you have sort of the information you need to determine that?

MARK NEWTON: Well, initially I’ll put more weight on oversold conditions and DeMark indicators potentially signaling a buy by the end of the month, but a lot of the cycles– you know, the most accurate one for Tesla over the last year is just the 107 trading day cycle. It occurs about once every 5 and 1/2 months. If you look back, it’s pinpointed almost every major peak and trough in Tesla over the last year.

So until that shows some evidence of not working, you know, my thinking is that, you know, we’re likely to see a bounce, but then I think we probably are going to show further weakness into the months of April/May before we really truly bottom, and I think that’s– I can say the same about the US stock market as well.

So, you know, what I did was just take a cycle composite– and it’s through the foundation of the study of cycles. They provide tools where one can look at highs and lows over the last 5, 10 years, 15 years, 20 years and really create, you know, a composite to really show you how a stock and/or an index might have the potential to bottom or peak out. And so that’s one part of the analysis, but I do find it quite useful.

JULIE HYMAN: Your stuff is very interesting, Mark, and it’s good to catch up with you about what’s going on with Tesla specifically. We’ll broaden it out next time and talk more about the broader market.