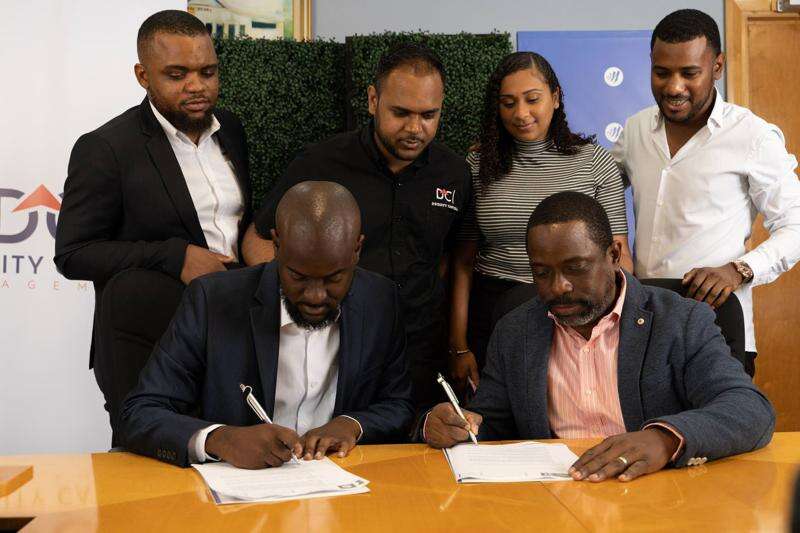 Dequity Capital Management Limited has added Mayberry Investments Limited as its financial advisor ahead of its expansion plans in 2023.

The strategic partnership was cemented through an agreement at Mayberry’s head office last Friday. Dequity Capital Management currently invests in a range of Jamaican businesses through private equity, public equity and permanent capital with some financing assisted via debt.

“Our shareholders have been kind to us, but the expansion plan that we have now needs additional sources of funding. What we’ve done is, we’re partnering with Mayberry to explore ways that we’ll be able to raise capital to invest not only in our portfolio companies, but also as you can imagine, since we’ve been wrapping up and getting things going, a lot more deals have come to our table. So, we’re looking at ways and opportunities in which we can participate with those SMEs (small and medium enterprises] as well,” said Chief Executive Officer Adrian Smith in an interview with the Jamaica Observer last week Friday.

Dequity had invested $1.2 billion to date across its range of portfolio companies which are in the finance, health-care, real estate, education, and digital and print media sectors. It acquired a 40 per cent stake in Royale Medical Hospital, Clinics and Imaging Centre and a 30 per cent stake in Elite Conceptz & Solutions in 2022. Other notable portfolio companies include iCreate, the Johnston Development Group, M24 Investments and Mairco Computer Technologies.

Its most notable investment has been in Dolla Financial Services Limited where Dequity’s 20 per cent stake is worth $1.46 billion. Dequity was able to realise a $62.5-million partial exit at Dolla’s initial public offering (IPO) in June 2022 and collected a $18.80-million dividend on December 7.

“The nature of the business of Dequity is in is to find these SMEs and entrepreneurs that we really believe in and these companies that we think, once we come on board, we can help them grow. We’re looking for those entrepreneurs that have that drive and have done well so far. What we’re looking to do this year is expand every single one of our portfolio companies,” Smith responded on the plans for 2023.

The partnership with Mayberry will see the brokerage firm arranging and structuring any related financing needs to Dequity Capital, its various subsidiaries and associated companies. This comes at a time when Mayberry Investments upsized its $5-billion secured public bond offering to the new $7-billion target with part of the proceeds to be deployed for general corporate purposes. Mayberry recently became the appointed financial advisors for Wigton Windfarm Limited and Caribbean Producers (Jamaica) Limited which are companies listed on the Jamaica Stock Exchange (JSE).

Smith highlighted that with the increase in interest rates, it has become even more difficult for SMEs to source capital to support their growth. This is compounded by the general hurdles SMEs encounter, ranging from opening a bank account, accounting and corporate governance. He said that the network Dequity has is there to support businesses and provide the necessary resources where possible, including management.

Although Dequity has some subsidiary companies, the focus is not to take over the business but to assist them with growth. The exhilarated CEO explained that after more than 20 years in Savanna-la-Mar, Westmoreland, Royale Medical — a private health-care facility — should be establishing its presence in Kingston over the next two months. This is based on its belief that Jamaican companies can expand beyond the area where they provide services to a market which could be as large as the Caribbean.

The private equity firm has also set its sights on increasing its real estate exposure through Real Estate Acquisition Limited, which will either acquire land to develop or acquire existing entities to generate rental income.

As a lead local sponsor of the JSE’s Regional Investments and Capital Markets Conference to be held in the next two weeks, Dequity plans to not only introduce some principals of their portfolio companies, but to also make some announcements based on recent engagements made with different companies.

“The nature of what Dequity, being a private equity fund, is that we want to bring these companies to a certain level of maturity and then at some point in time, list them on the Jamaica Stock Exchange. Once they start to hit the targets that we set for the company, the next logical step is listing because they’d want to achieve even more,” Smith added.

Dequity Capital Management is managed by its wholly owned subsidiary Dequity Capital Fund Managers Limited (DCFM) which is an asset management company that manages the administrative activities under a contract. Some of DCFM’s principal executives include Kevon McIntosh, Vyktor Drum and Kira Azan. Dequity Capital Management is a privately held St Lucian International Business Company which was founded by majority shareholder Kadeen Mairs, other shareholders including Smith, Dr Germaine Spencer and Garold “Gary” Hamilton. Damien King chairs the board with financial professionals Lisa Gomes and Kerry Spencer as some of the other directors on the board.