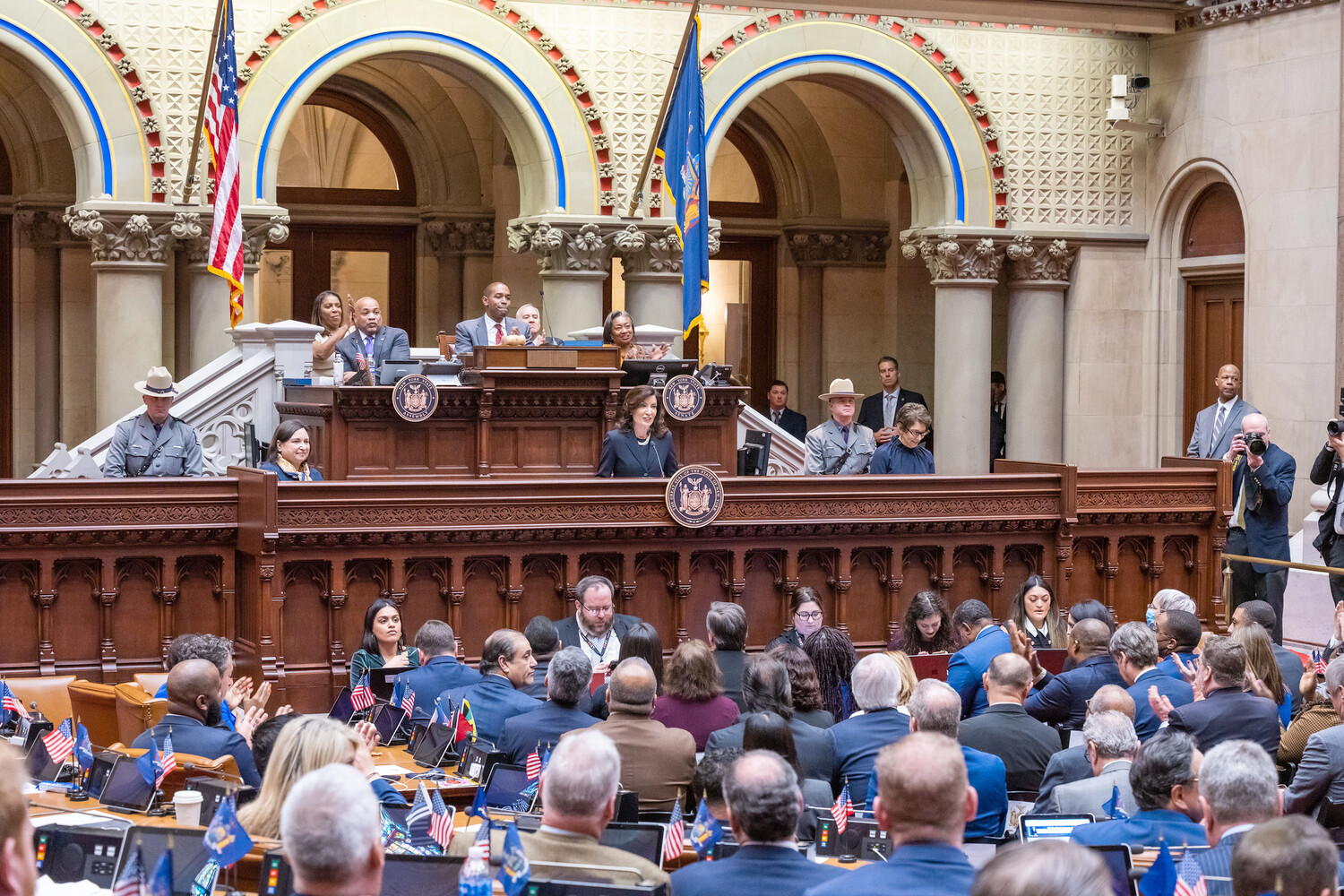 Gov. Kathy Hochul delivered her State of the State address in Albany Tuesday. In it, she proposed major investments in mental health services, public safety initiatives, housing and other issues facing New York.

Hochul said her priority in 2023 is to make New York “more affordable, more liveable, and safer.”

“If New Yorkers don’t feel safe in their communities, if they can’t afford to buy a home or pay their rent, then the dream stays out of reach for them,” she said, in her first State of the State as an elected governor. “And we’re already seeing signs of outmigration that we can no longer ignore.”

“We have underinvested in mental health care for so long and allowed the situation to become so dire that it also has become a public safety crisis as well,” Hochul said. “So I’m declaring the era of ignoring the needs of these individuals is over.”

“I am committed to using every tool at my disposal to protect the people of this state, crack down on gun violence and violent crime, and invest in proven solutions that keep New Yorkers safe.”

The biggest applause of the speech came when she announced a plan to peg the minimum wage to inflation, so that if costs go up, Hochul said, so will wages.

She also said there would be “guardrails” to help ease the impact on small businesses. But she gave no details on when the minimum wage would rise.

The governor also proposed plans to double the pace of housing construction using a set of policies under the umbrella of what she called the New York Housing Compact.

She says housing construction in New York has not kept up with the 1.35 million new jobs created in the state in the past decade. The crunch is particularly intense in the New York City suburbs, where many people who have jobs in the state live in New Jersey or Connecticut instead.

Every locality in the state will be assigned a “new home (creation) target.” Downstate regions have a 3% target every three years, averaging 1% a year, and upstate regions have a 1% target over the same time period. The plan includes rezoning to allow for multifamily units, splitting single-family lots into two, and rezoning some commercial areas into residential, including parking lots and underused shopping malls.

“Today, I say no more delay. No more waiting for someone else to fix this problem. Housing is a human right,” Hochul said to applause. “Ensuring enough housing is built is how we protect that right.”

If localities do not meet their targets, the state would step in and impose an expedited approval process, including shortcuts for environmental permits to developers who want to build in those areas.

The governor says a key component of the plan is reviving a tax break given to real estate developers who include affordable housing in their projects, known as 421a. The provision expired last year, after Hochul and the Legislature were unable to agree on a replacement. The governor says she’ll work with lawmakers to do that this year.

Hochul reiterated her support for New York’s controversial 2019 bail reform law. “The size of someone’s bank account should not determine whether they sit in jail or go home even before they’ve been convicted of a crime,” she said. “That was the goal of bail reform. It was a righteous one. And I stand by it.”

But she said the law could use “improvements”, including giving judges more leeway to hold in jail someone accused of a serious violent crime.

Republicans have pointed to bail reform as the cause of an increase in crime since 2020. Hochul said other factors, including the coronavirus pandemic, were more to blame.

Assemblyman Matt Simpson, a Republican from the North Country, criticized Hochul’s State of the State address in a statement, describing her proposals as “more unfulfilled promises.”

“We heard a lot of talk about building affordable housing in New York City; how about we do something meaningful to make it more affordable for all New Yorkers to own what they have now? I hope the Majority in Albany can deliver during this legislative session and fulfill the promises made to the deserving residents of New York.”

More details on the governor’s proposals will likely be included in her budget plan in the coming weeks.

Assembly Speaker Carl Heastie said he was pleased to hear Hochul address the “drivers of crime” instead of waiting until the moment that someone is arrested, and he likes the governor’s housing and mental health plans.

The Speaker said he has not yet examined Hochul’s proposal to amend the bail reform laws.

Heastie said he also backs the idea to increase minimum pay for New Yorkers. “The fact that you really want to get out of this trying to fix the minimum wage every couple of years, I think it’s a solid approach,” Heastie said.

There are tensions, though, between the governor and Senate Democrats over her nominee for the next chief judge of New York state. Fourteen of them say they will vote against Hochul’s choice of Hector LaSalle, saying some of his opinions are too conservative.  Hochul says she’s not backing down.

Senate Leader Andrea Stewart-Cousins did not comment after the speech.