There’s an interesting dichotomy taking shape today in the energy sector. Oil prices have fallen lately, but the stock prices of oil producers like ExxonMobil (XOM 0.64%) have remained fairly strong. Given the tie between the price of oil and the profits of oil companies, that suggests that now is a time for caution. Here’s a deeper look at why.

In 2020, governments around the world effectively shut down their economies in an attempt to slow the spread of the coronavirus. That resulted in a swift drop in demand for oil and natural gas. The energy industry was hit very hard, with oil prices in the United States actually falling below zero for a brief moment in time. Although this was a short-lived event, think about what it means — producers were paying customers to take oil off of their hands. 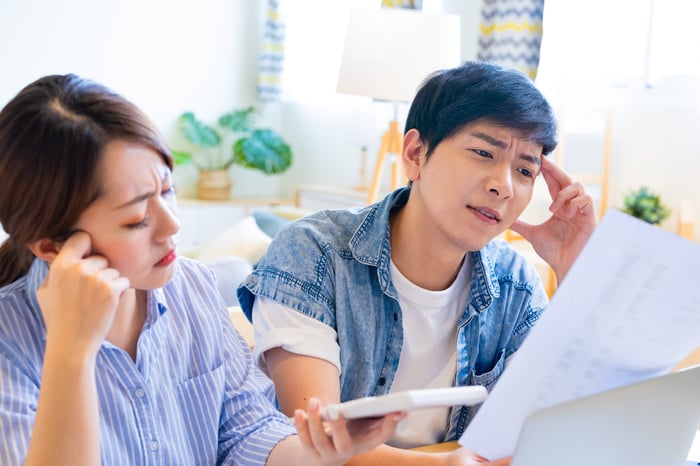 To put some numbers on this, integrated energy giant ExxonMobil lost $22.4 billion in 2020. That’s a loss of about $0.33 per share, which makes the drop seem less severe. However, when you compare that per-share loss to the $2.25 it earned in 2019, you start to see just how terrible a year it was. ExxonMobil, like many of its peers, ended up adding debt to its balance sheet just so it could muddle through. The company’s debt-to-equity ratio roughly doubled during that year, peaking at more than 0.4 times. To be fair, that’s still a fairly modest debt ratio, but the rapid increase was jarring to many investors, with some worried that the dividend would need to be cut.

The thing is, energy prices are notoriously volatile. So while the coronavirus pandemic made the 2020 price decline something of a shock, the downturn wasn’t actually that unusual. As 2023 gets underway, the oil sector has recovered. For example, in the third quarter of 2022, ExxonMobil posted earnings of roughly $19.6 billion, or around $4.68 per share. That’s a huge improvement over 2020 and more than the company earned in all of 2019!

Given that information, it shouldn’t be too shocking to see that the stock has risen dramatically since hitting a low point in 2020. And that’s the way things go in the oil industry, generally speaking. Oil and gas prices go down, and so do energy stocks. Oil and gas prices recover, and so do energy stocks. The best operators use the good times to prepare for the bad, noting that ExxonMobil’s debt-to-equity ratio has fallen back to its pre-2020 level again as it’s used its huge profits to strengthen its balance sheet.

But, given the nature of the industry, investors need to start thinking about the downside when times are good. This brings up a strange event that’s taking shape right now. While energy stocks like ExxonMobil continued to perform well, oil prices have retreated from the peak levels of 2022. Some oil companies have even come out and warned that fourth-quarter 2022 results would likely be down from earlier in the year. 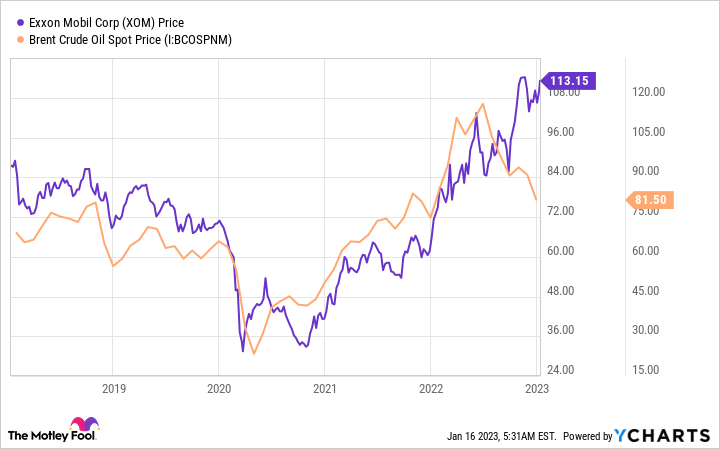 Although there’s no way to predict where oil and natural gas prices will go next, the fact that ExxonMobil’s stock isn’t tracking along with oil like normal is a worrying trend. It suggests that now is a time for caution, not aggressive actions. To be fair, ExxonMobil is diversified, financially strong, and probably a good option for investors looking at the energy sector today. But that’s largely because it has proven it can survive industry downturns, not because it is a screaming buy.

Oil is a commodity, and it has dropped from recent peaks. That’s likely to lead to weaker results at energy companies, even industry Goliaths like ExxonMobil. That fact hasn’t flowed through to stock prices yet, but history suggests it eventually will, which makes now a time for caution in the energy patch. For most investors, it would be better to stick to a financially strong and diversified name like ExxonMobil than to chase after a tiny wildcatter that’s highly leveraged to energy prices, given the current industry dynamics.