Just a few weeks ago, stocks looked like they were headed for another bottom.

In fact, the Nasdaq Composite posted its lowest close of the year on Dec. 28, 2022, after the stock market drifted downward following the Federal Reserve’s forecast to raise the federal funds rate by another 75 basis points in 2023. Fed Chair Jerome Powell stood by earlier comments that the central bank was determined to bring down inflation to its 2% target even if it meant some pain in the job market and the economy.

However, investors seem to be singing a different tune in 2023, and stocks are off to a solid start to begin the year. 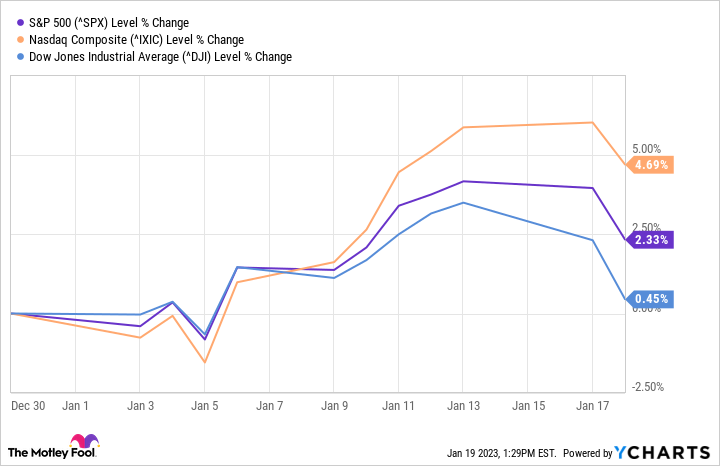 So far, the stock market has been helped by a solid December jobs report that showed continued employment growth, but wage growth is slowing, which seems to be what the Federal Reserve wants. Investors also cheered after the December Consumer Price Index confirmed that inflation had continued to decline, in line with expectations. Month over month, prices actually fell by 0.1% in December thanks to a decline in gasoline prices, and the year-over-year inflation rate of 6.5% was the slowest in the economy since Oct. 2021.

Every investor would like to know if the market bottom is already in. There’s no way to know for sure, and conditions can change at any time, but there are a number of signs showing that the worst of the market pullback could be behind us. 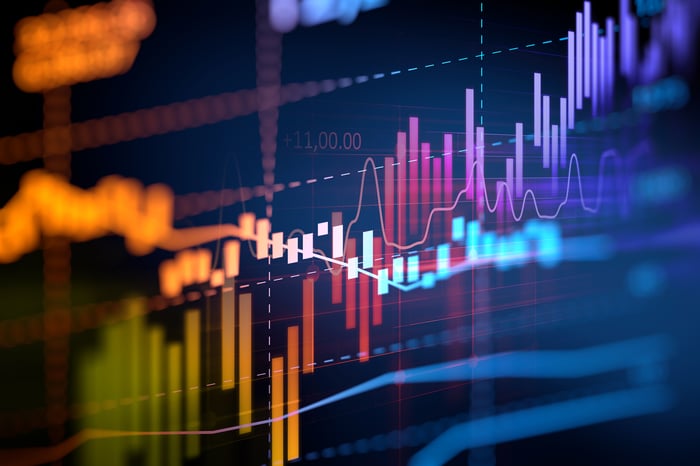 Are we out of the woods?

Last year’s sell-off was primarily because high inflation led the Federal Reserve to ramp up interest rates, taking the benchmark rate from near zero at the start of the year to 4.25% to 4.50% at the end of 2022. Interest rates and stock prices tend to have an inverse relationship. As interest rates rise, the discount rate on stocks rises as well, pushing valuations lower. Investors also tend to move money out of stocks and into the bond market as interest rates rise.

Though the Fed had forecast 75 additional basis points of rate hikes this year, there are signs that inflation may already be tamed. In the second half of 2022, inflation grew by a total of just 0.9%, or 1.8% on an annualized basis, on target for the Fed’s goal of 2% inflation. That’s partly because energy prices fell sharply in the second half of the year, but there are other signs that rising prices are coming under control. Food inflation steadily decelerated over the second half of the year, coming in at 0.3% month over month in December, and though inflation in “shelter” still looks high, rents and home prices are already coming down in much of the country. They just haven’t flowed through to the CPI yet as renters only renew their leases once a year.

Given the slowing rate of inflation and the likely decline ahead in shelter, there’s a good chance that the year-over-year inflation rate will be much closer to 2% by the middle of 2023.

Powell has said before that he wants wage growth to slow as he believes that’s necessary to rein in inflation, but that seems to be happening too. Average hourly earnings rose just 0.3% in December from the previous month and were up 4.6% on a year-over-year basis, a sign wage growth is slowing as well, a key input in inflation.

Additionally, bond rates have also come down substantially in recent months, showing bond investors think the Fed rate hikes may soon be over. The yield on the benchmark 10-year Treasury note has fallen from 4.33% in October to just 3.53% now, and the dollar has also cooled off since then, which should act as a tailwind later this year.

Finally, earnings per share for the S&P 500 is expected to grow in 2023 after a decline last year. An increase in corporate profits would clearly be bullish for a recovery.

What it means for investors

Timing the market is generally a mistake, and even the best investors can’t consistently do it.

While it’s good to be informed about the macro-level economy to understand why market movements happen, what’s more important for individual investors is that you don’t miss out on the recovery. Young bull markets often generate some of the highest returns you’ll find on the stock market. For instance, the S&P 500 bottomed during the financial crisis on March 9, 2009, at 666 before rallying to 1,115 at the end of the year for a gain of 67%. A similar rally took place in 2020 following the pandemic crash when the S&P 500 gained 71% from the bottom on March 23.

With the S&P 500 only losing 19% last year, investors are unlikely to see those kinds of gains in this recovery, at least in the broad market, but waiting for the market to bottom would almost certainly be a bigger mistake than getting into the recovery too early.

A full-fledged recovery may need a green light from the Fed, but the recent data gives good reason to believe that rate hikes could come to an end soon.