Stock splits don’t necessarily lead to gains in a particular stock. That’s because they don’t change anything about a company’s earnings, business, or total market value. But they do decrease the price of each individual share, making it easier for a broader range of investors to get in on the stock.

Last year, some of the market’s top players completed splits. Their prices soared in previous years — and the stock splits brought them back down to earth. At the same time, economic woes weighed on valuations, which made some of these stocks truly cheap. Let’s check out two wildly undervalued stock-split stocks to buy now.

Higher interest rates and general economic troubles are weighing on the digital advertising market. And that’s hurting Alphabet (GOOG 5.72%) (GOOGL 5.34%) right now. Revenue at the parent company of Google rose 6% in the most recent quarter. That’s compared to a more than 40% increase in the year-earlier period.

Still, it’s important to keep two things in mind. First, Alphabet’s revenue continues to gain in spite of headwinds. Second, today’s economic troubles are temporary, and Alphabet has the strength to get through these tough times.

Google holds nearly 85% share of the search market, according to Statista, and this market leadership has remained pretty stable over the past several years. This clearly makes advertising on Google a great option for companies hoping to be seen.

Alphabet also has been investing in high-growth areas such as artificial intelligence to keep Google search ahead of the crowd. The company’s investments have paid off over time; return on invested capital and free cash flow generally have been on the rise. 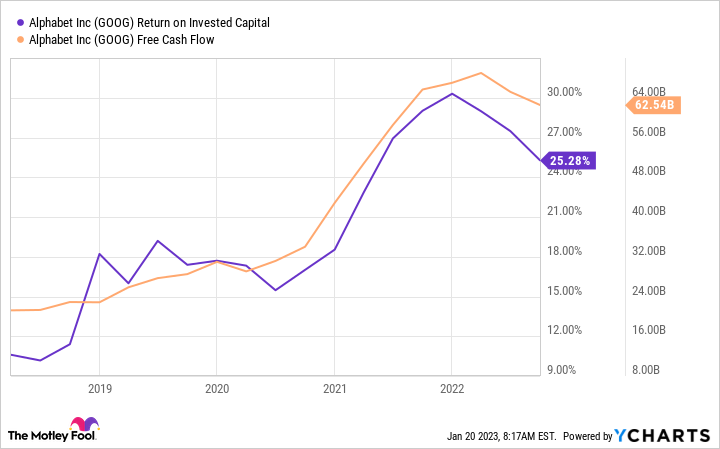 Now let’s talk valuation. Today, Alphabet trades for about 18 times trailing-12-month earnings, around its lowest in a decade. This is a monster opportunity — to get in on a stock of a company with major market share that’s set to drive gains over time.

Amazon (AMZN 3.81%) is another recent stock-split company suffering from today’s economic environment. Rising inflation is eating away at customers’ buying power — and it’s also increasing Amazon’s costs. As a result, the company has reported quarter after quarter of earnings weakness over the past year; it also had declines in operating income and operating cash flow.

But, like Alphabet, Amazon benefits from two things: These tough times are temporary, and the company is strong enough to weather the storm. The e-commerce giant has launched cost cuts, including the elimination of 18,000 jobs. Amazon’s improvements to its cost structure should help in the near term — and boost performance over the long term too.

Why invest in Amazon for the long term? Because the company is a leader in two high-growth markets: e-commerce and cloud computing. They’re both growing by double-digit percentages, and Amazon is well positioned to benefit from this over time. Amazon Web Services (AWS) — the cloud computing unit — even continues to grow in the double digits despite today’s headwinds.

Recovery may not happen overnight. But since it’s impossible to time the market, it’s always a good idea to get in on a company when the share price looks reasonable, considering its long-term prospects. Today, Amazon is trading at its lowest price in relation to sales since 2015. That doesn’t just look reasonable — it looks dirt cheap. And that’s why now is a great time to scoop up shares of this top company.